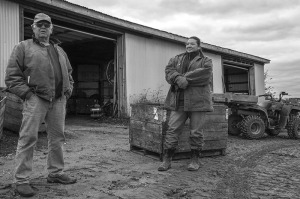 Boals Orchards is a second generation farm located in Kewadin, MI. Originally a dairy farm started in 1945, the Boals family has been farming this land for the past 69 years. Ron Boals purchased the farm from his parents and transitioned from raising beef cattle and cherries to apples. The Boals family now grows seven different varieties of delicious apples. Altonen Orchards boasts a huge variety of Northern Michigan produce grown just outside of both Elk Rapids and Eastport, MI. As a third generation farm they now raise asparagus, strawberries, raspberries, peaches, pears, plums, apricots, sweet corn, a variety of other vegetables, and 20 + varieties of apples. Brian Altonen, his brother Jason, and his father John keep busy throughout the year in the orchard and running the fruit press for cider. King Orchards is a first generation orchard and farm with their roots in Central Lake, MI. Pioneered by Jim and John King, this is a family owned and operated farm (pictured right, Jack and Courtney King). Multiple orchards and two farm market locations offer u-pick opportunities for a variety of fruit including cherries, apricots, peaches, pears, apples, and many berries. The Balaton and Montmorency cherries that we use to make Squishy are grown at King Orchards.